The French EU Presidency: An Opportunity for the Digital Transition? 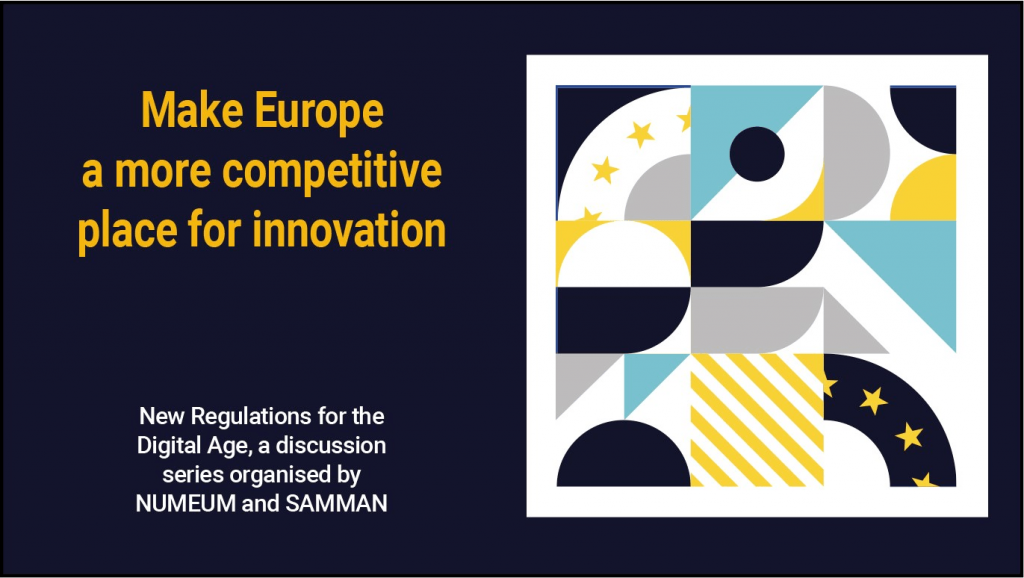 “We want to be able to walk on both legs – innovation and regulation” it’s with these words that Cédric O, French Minister for Digital Affairs and Electronic Communications, introduced the digital priorities of the upcoming French Presidency of the Council of the EU (French EU Presidency). In his keynote of the online event organized by Numeum, the leading voice of the digital sector in France, and SAMMAN Law & Corporate Affairs (link to the replay here), Cédric O outlined France’s ambition to close the dialogue on the Digital Services Act and the Digital Markets Act and move forward the Artificial Intelligence Act and the Network and Information Security 2 Directive in order to give to the EU the means of winning its independence in the digital field or, in other words, its strategic autonomy.

But what does strategic autonomy imply for the tech industry across Europe? And how will it transfuse the key EU initiatives during the French EU Presidency?

French and EU policy makers, industry representatives from OVHCloud, Renault, Salesforce, Numeum and DigitalEurope and the think tank Renaissance numérique came together to try answer these questions and detail their own expectations throughout two panels moderated by François Lhémery, Director for Public Affairs and Communication at Numeum, and Thaima Samman, Partner at SAMMAN.

The French EU Presidency: How will European Industry Champions Achieve their Digital Transition?

Nine months after the merging of TECH in France and Syntec Numérique into Numeum, the trade association released its recommendations for the French EU Presidency. As per Numeum’s Co-President Godefroy de Bentzmann, the sector does not suffer from any shortage of ideas on how European players can reach a critical size to provide disruptive technologies and accompany Europe’s green transition. A predictable regulatory environment and investments in technologies are key conditions for industrialising Europe.

Eric Feunteun, Chief Operating Officer of the Software République division of Renault, is driving the group’s transition from a pure player in the automotive industry into a tech company that provides mobility and car-as-a-service solutions. In the day-ot-day activity, this means placing connectivity, cybersecurity, and the energy efficiencies of the industry and of digital tools themselves at the core of business decision-making. But the group is cooperating with the European ecosystem to bring forwards new solutions, combine skills and foster a new European ecosystem.

Cécilia Bonefeld-Dahl, Director General at DigitalEurope, has witnessed data-driven transformations over the past few years that have increased protections for European citizens. The EU, where only 5% of the world’s unicorns are established, now needs to remove the barriers to growth for its own companies and unleash their potential to support the Green Deal agenda. For DigitalEurope, the French EU Presidency will need to drive innovation in key EU legislations (Data Act, Data Governance Act, NIS Directive…) and improve the dialogue with the U.S. through initiatives such as the Trade and Technology Council.

Debunking Strategic Autonomy: How does the EU Digital Agenda fit within?

Presidentof the French think tank Renaissance numérique Nicolas Vanbremeersch set the scene for a discussion on the implications of the French EU Presidency’s priority to strengthen the EU strategic autonomy. There is a need to understand how “strategic autonomy” is achieved in different industry sectors and at different levels of each value chain and how it contributes to firm up an actor’s “sovereignty”. Renaissance numérique understands “digital sovereignty” as a strategy of empowerment of the EU, but which does not lead to closing up the EU.

France has a similar approach as per Mathieu Weill, Head of the Digital Economy Service at the French Ministry of Economy, Finance and Recovery. Digital sovereignty is not about protectionism and building barriers, but about ensuring fairness, openness, and freedom of choice. To that extent, “there is no freedom of choice without some form of digital autonomy”. This is where the French EU Presidency will play a role, fostering cybersecurity rules and standards applicable to all players and building the digital ecosystem: « Europe is the right level to address these issues. »

The industry should be part of the dialogue on standard setting in the tech sector.

For Stéphanie Finck-Piccin, Vice-President EMEA Government Affairs & Public Policy at Salesforce, the customers’ success is at the core of a cloud player’s decision. More and more, cloud customers want choice, full control over their data and legal clarity on how data is processed. With this in mind, the French EU Presidency’s priorities for the digital agenda are good news. Achieving clear, EU-wide rules on cybersecurity certifications schemes, for instance, can drive customers’ trust and consolidate the EU-wide market.

Michel Paulin,CEO of OVHCloud sees the French EU Presidency as a unique opportunity to strengthen EU’s data sovereignty and redefine key principles for a digital single market, i.e., openness, data reversibility, data security, exemplariness, and building a decarbonized economy. The Digital Markets Act, the upcoming Data Act, but also the adoption of an EU cloud cybersecurity certification scheme can bring more freedom of choice to European customers with France in the driver’s seat.

In the words of member of the European Parliament Eva Maydell (EPP, Bulgaria), strategic autonomy can be achieved only by building a stable digital market guaranteeing the freedom to act inside the EU and globally. The French EU Presidency should build partnerships where the EU does not act as the weakest link.

As recalled by Anthony Whelan, member of cabinet of European Commission President Ursula von der Leyen, the Commission’s Industrial Strategy underlines interdependencies without trying to eliminate them. These must be sufficiently balanced to enable the EU to defend its interests and remain open, as it aims to do through the Trade and Technology Council established with the U.S.. For the Commission, « open is not a synonym of naive ».